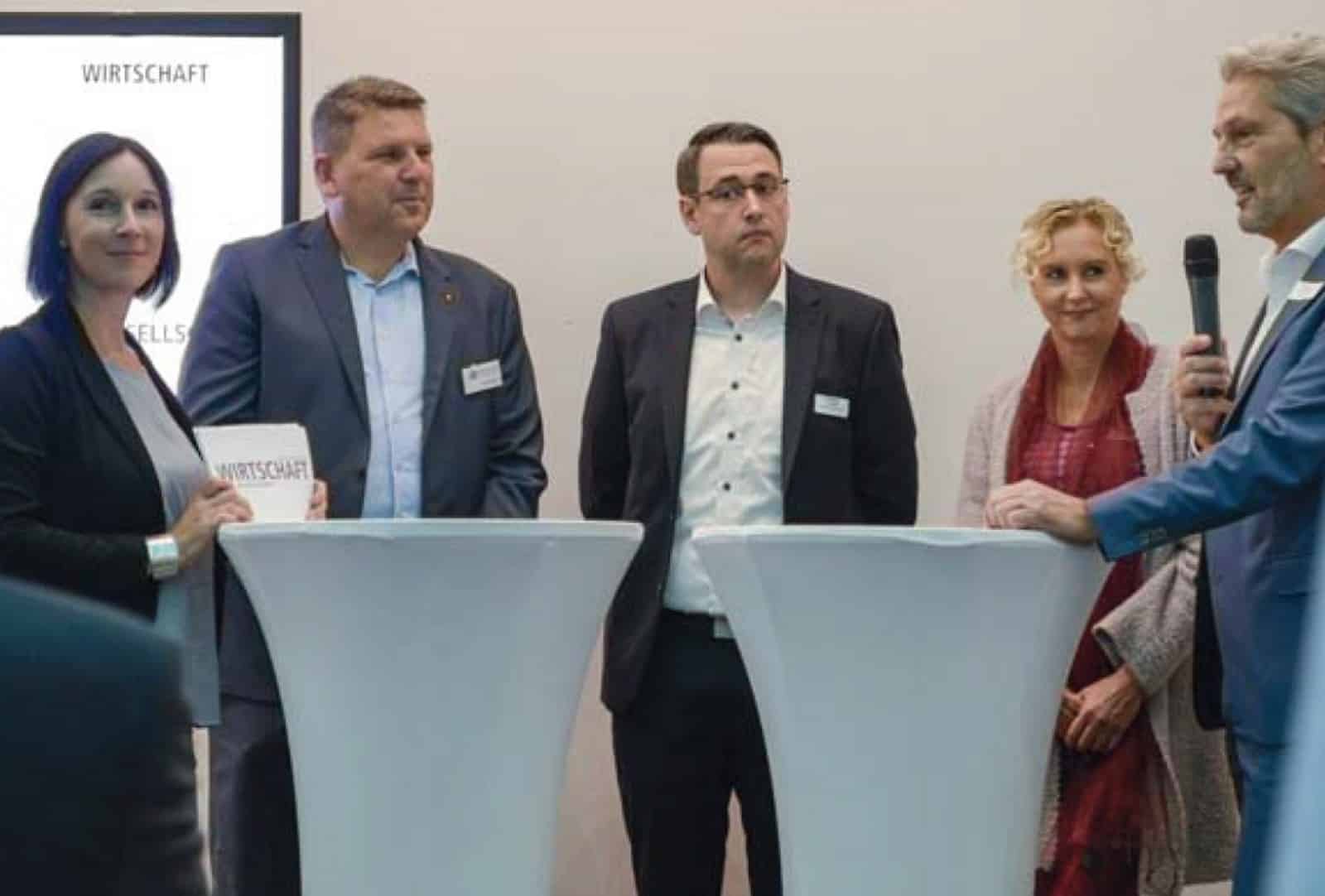 The sixth edition of the HANAUER ANZEIGER entrepreneur’s breakfast took place at the Gelber Berg in Kilianstädten. Axel Ebbecke welcomed more than 80 Guests, who followed the invitation of our publishing house, to his company site in Schöneck. One of the topics that were discussed with the main sponsor of the basketball team Ebbecke White Wings was sponsoring by mid-size companies.

This Wednesday, the basketball team Ebbecke White Wings travelled to the Gelber Berg in Kilianstädten. The reason not being a game as could be expected, but rather to visit the site of their main sponsor Ebbecke Verfahrenstechnik AG, where the sixth edition of the HANAUER ANZEIGER entrepreneur’s breakfast took place. The topic to be discussed was the benefit mid-size companies can get out of sponsoring, this was underlined by the players‘ presence. In front of more than 80 interested listeners The HA’s Vice Chief Editor Yvonne Backhaus-Arnold and Editor Monica Bielesch moderated this discussion titled „Economy meets . . . Sports, Culture and Society“ between the host Axel Ebbecke, White Wings Manager Sebastian Lübeck, Branch Manager of the Mercedes Benz Branch in Hanau, Stefan Scheuermann, as well as Evonik Hanau’s Head of Communications, Silke Wodarczak. Axel Ebbecke explained why his company decided to support and lend their name to the White Wings even though his company has no customers in the consumer sector to be attracted by this. Ebbecke Verfahrenstechnik produces for international corporations and rarely advertises its services. „We act globally, yet have a local responsibility“, the Founder explained.

Ebbecke-White-Wings-Manager Sebastian Lübeck illustrated what sponsoring means, beside the financial aspect. „Needless to say it is the basis for all our activities. However, we don’t see our sponsors as benefactors, instead we consider them as partners.“, Lübeck stated. The partners are then supported in own projects. „And of course the games can be enjoyed on regular basis. There is always excitement“, Lübeck promoted. Evonik also has a connection to ball games. The company is the sponsor of soccer club Borussia Dortmund. In addition the Hanau facility is permitted to support causes of their own choosing. Amongst others, there is a collaboration with the HA, the Evonik Children’s University. „We support three sectors: education, culture and social matters“, Wodarczak explains. First of all this means something to the employees and makes them proud, with social commitment also being part of the responsibility of a large corporation. „Sponsoring increases name recognition, which also helps if you are looking to catch the attention of skilled personnel“, Wodarczak added. The Mercedes branch Hanau supports cultural causes. For many years they have been main sponsor of the Brothers Grimm Festival. „How do you benefit from this?“, Yvonne Backhaus-Arnold asked Stefan Scheuermann. „We want to give something back to the people in the region. An event such as this festival makes this possible.“, Scheuermann emphasized. Using one of the convertibles to represent a carriage in one of the plays was obviously also a great way to present the brand. „There is no better way to advertise“, Scheuermann added. The second part of the morning was focused on the topic „Learning Economy“ using the example of the Vocational Training College in Gelnhausen, which is the largest of its kind in Hessen, teaching apprentices of 32 professions the skill sets they require.

„In order to warrant that our 3600 students are up to date we require sponsorships for modern equipment“, Principal Hartmut Bieber explained. The school’s supporters association was joined by 40 industrial companies in order to grant their apprentices a high quality education. Training the teaching staff also relies on support from the industry. „For each full-time position we are entitled to 40 Euros per year. However, advanced training costs around 1,000 Euros.“, Bieber states. Axel Ebbecke goes on to report on a business workshop carried out with Lichtenberg-Grammar-School seniors in Bruchköbel „Too few people of the younger generation become self-employed. The students‘ age is exactly right to introduce the topic to them“, said Ebbecke. The Lions Clubs Main-Kinzig Intercontinental has been giving speeches for some years now. „Can I get a loan?“ or „Are self-employment and family planning compatible?“ are some of the questions that young people are looking to have answered. Editor Monica Bielesch proposed to test the concept at the Vocational Training College in Gelnhausen, and with this kicked off the next important topic of the agenda, networking. After the debate was finished, the participants were able to continue their discussions.